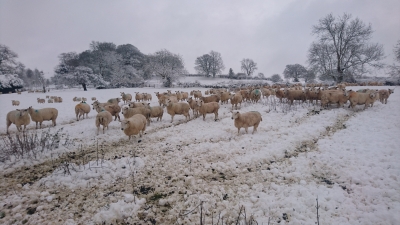 Above: One of our wildflower strips in full bloom

A Scotch half bred x Lleyn ewe and newborn twins 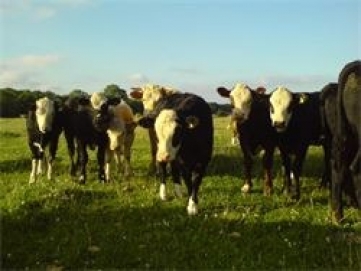 In 2003, we started a suckler herd, mainly consisting of 70 Hereford and Aberdeen Angus cross heifers who were put in-calf to our Hereford and South Devon bulls Gregory and A.J. In 2009 we replaced Gregory with Oskar the Aberdeen Angus, followed by Digby the Bazardais (a breed from the Pyrenees in France) and in 2013 we bought Jaguar, a pedigree Hereford from the well-known Bromham herd in Wiltshire.
Our current bull is Pioneer, from the same breeder.

We chose the current breeds because they are native to Britain and so more suited to our climate, and because they are excellent converters of grass, meaning they are able to produce meat without the need for much of any extra concentrate (cereal-based) feeds.This makes them ideal for extensive and organic systems where animals are grown slowly on a grass-based diet, to reach maturity in their own time without being fed large amounts of cereal-based foods.This ultimately leads to a better flavour and high quality meat.
We also have a very small number of pure bred Hereford and Aberdeen Angus cows and produce small quantities of Pure Hereford and Angus beef each year.The herd calves in two main groups, early March and late July/early August.

Legumes are an important part of an organic system. This includes plants such as red and white clover, Lucerne (Alfalfa) and Sanfoin as well as peas, beans and vetches. They have small nodules on their roots that are able to take nitrogen and "fix" it into the soil. Nitrogen is one of the elements that is vital for plant growth and is one of the main ingredients in chemical fertilizer. By growing legumes mixed in with the grass, we can raise the fertility of the soil for free and when the field is ploughed up for a cereal crop, the nitrogen is released slowly as the clover roots rot down and feed the crop. Legumes are also a good source of protein and so they are an excellent feed for livestock.
We often grow a grass and clover mixture as a temporary ley to provide fresh grass for livestock and a break from arable crops to rest the soil and it not only yields well but smells wonderful in high summer and attracts a large number of bees.

Overtown is in the heart of the Cotswolds Area of Outstanding Natural Beauty (AONB) and borders the National Nature Reserve at Cranham Common and several Sites of Special Scientific Interest (SSSI's) and Special Areas of Conservation (SAC).

We started our conversion to Organic farming in 1999, achieving full organic status in 2001. The whole farm, and all its enterprises are managed to Soil Association Organic standards and our aim is to increase the fertility of the soil and reduce pests and diseases by natural methods such as grazing, crop rotations, choice of crop and encouraging a natural balance of predator and prey, rather than by reliance on chemical fertilizer and sprays. All the manure produced by the animals while they are housed for the winter months is composted and then returned onto the land to keep the cycle of fertility going.

Overtown Farm has been in various Agri-Environmental Schemes for over a decade and was one of the first farms in the country to enter the Countryside Stewardship scheme.  In 2014 we entered a 10 year Higher Level Stewardship Scheme. Just some of the projects we have carried out include...

The jewel in the crown is unboubtedly the 1 mile of 40 foot wide wild flower grassland strips planted alongside the lane to the farm and the drive that runs through the centre of the farm. They are already a riot of colour every summer and will be a source of food and shelter for birds, butterflies, bees, hares and other creatures for the duration of the 10 year scheme. This is a big commitment, but one that is already showing huge benefits in terms of the number of bird species we see on the farm every day, including the Corn Bunting which is a declining species and returned to breed here in the first year of the scheme! 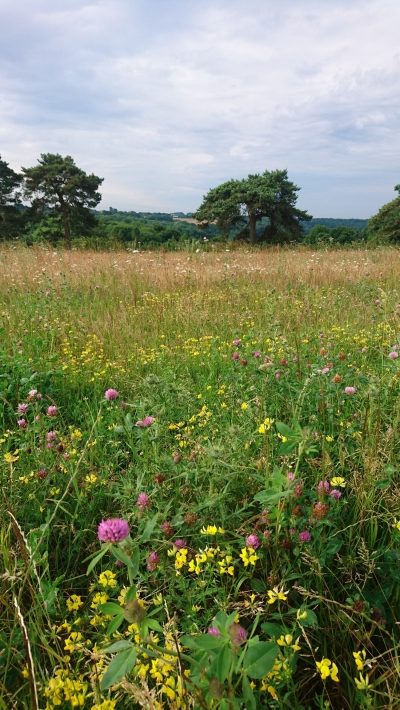 Above: Some of our yearling Hereford cross  beef cattle 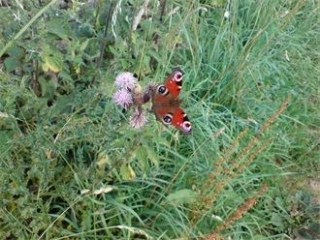 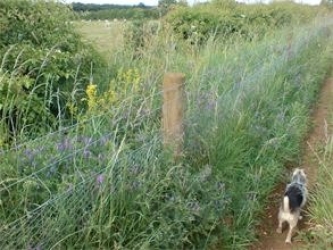 Above: Part of a 300m mixed native hedge we planted on the site of an old broken down Cotswold stone wall to provide shelter for livestock and a nesting site for wild birds. 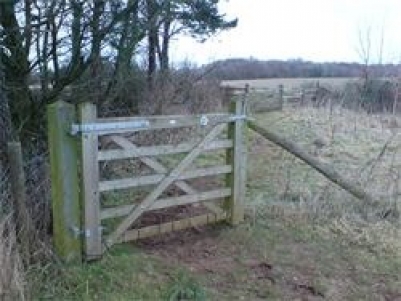 There is a network of public footpaths and bridleways across it for the public to enjoy. We have also created further permitted paths and bridleways which the public may use to enhance their access to the surrounding countryside. You are very welcome to walk the clearly waymarked routes on the farm but please keep to the paths and be aware that our farm is grazed all year round and you are likely to come across cattle and sheep at any time. If we have livestock grazing on a large area we will often tie the gates open so the animals can wander from field-to-field but otherwise, please shut them behind you and make sure they are securely latched.

Our sheep have been the victims of dog attacks in the very recent past and this is sadly increasing.
Many of our fields inter-connect and we often "free-range" graze several fields at a time so you may come across livestock at any point. Because of this, dogs must be kept on a short lead on all areas of the farm as livestock are likely to be in every field you cross. Please be careful if you use an extending lead as these can give a false sense of security and we have had lambs attacked when they have popped up from behind a gateway and a dog on an extending lead has had time to grab it before the owner can get the dog under control. This applies regardless of whether you are walking, cycling or riding your horse and we would politely ask that you do not bring your dog if you are not able to comply with this request.

Currently, Overtown supports a flock of 370 breeding ewes.
The sheep are a mixture of breeds; mainly mules (Blue Faced Leicester crossed with Lleyn x Scotch half bred), Mules x Vendeen and Lleyn x, but there are also some more unusual breeds such as the local Cotswold, Herdwicks from the Lake District and Badger-Face Welsh Mountain sheep.
We usually have 9 rams and they are pure Texel and Texel x Lleyn to produce fat lambs, and Vendeen and Lleyn to breed ewe lambs as flock replacements. We aim to keep up to 80 ewe lambs each year and they lamb for the first time at 2 years of age.
We lamb in early April to mid May to take advantage of the longer days and (not always!) better weather to give the lambs the best possible start in life and, within two days of birth, the lambs and their mothers will be back out in the fields.

We grow around 50 acres of whole crop arable silage, (a high protein mix of cereals grown with Vetch and peas) to make into round bale silage to feed the livestock in the winter. Being legumes, peas and vetch have the added bonus of being able to "fix" atmospheric nitrogen into the soil to create fertility for the next crop, as well as being a nectar source for bees and other insects when they are in flower.
We also grow some organic cereals; mostly Oats, Barley and Triticale (wheat/rye hybrid) to our cattle and sheep and to provide straw for their winter bedding and the surplus grain is sold.

The largest part of the farm is the permanent pasture which supports not only our livestock, but a rich and diverse list of wild plants, mammals, invertebrates, and even the odd reptile. We make hay and silage from this in summer to feed to the animals in winter and we believe the species rich grass contributes to the flavour and quality of our meat, which is often commented on by our customers.

Above: Peacock butterfly on a nectar-rich Thistle flower 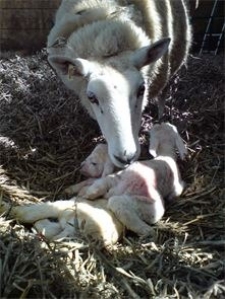